The Echo products by Amazon have become revolutionary over the last few years. They’re a handy tool to have around the house because they let you play music, make quick, verbal internet searches, order groceries, and more even if your hands are full. 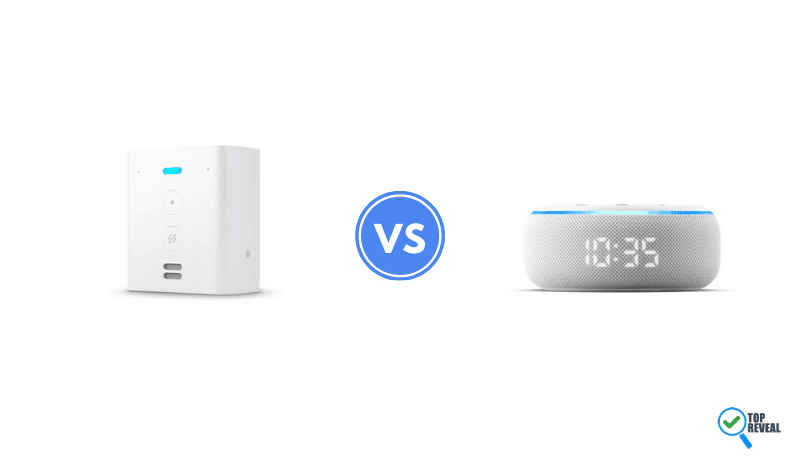 There are a lot of Echo products on the market today and they boast plenty of different features and functions. So, if you’re in the market for a new Echo product, you might be wondering where to turn. Today, we’re going to take an in-depth look at the Echo Flex vs. the Echo Dot to help you determine which model will fit your home best!

Both the Echo Flex and Echo Dot are fantastic Amazon Alexa products. They’re there to answer your questions and do your bidding but when it comes to making a choice, we think the Echo Dot goes a step further.

It does everything the Echo Flex offers with additions such as Alexa Skills and a digital display. 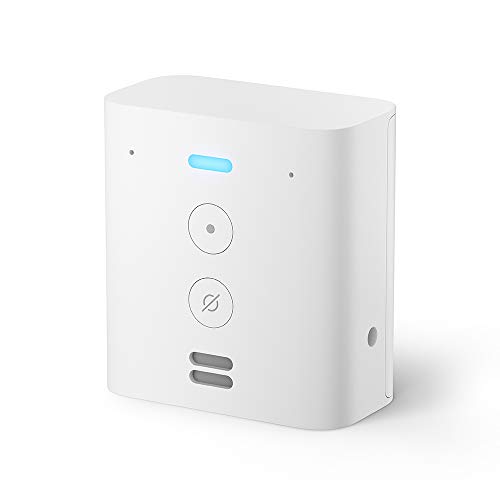 The Echo Flex is one of the most compact Echo speakers that Amazon has developed. it’s made to be small, convenient, and a convenient tech piece to slip into a home of any size or style. When you break it down, there are some obvious reasons that the Echo Flex Plug-In Speaker offers the appeal it does: 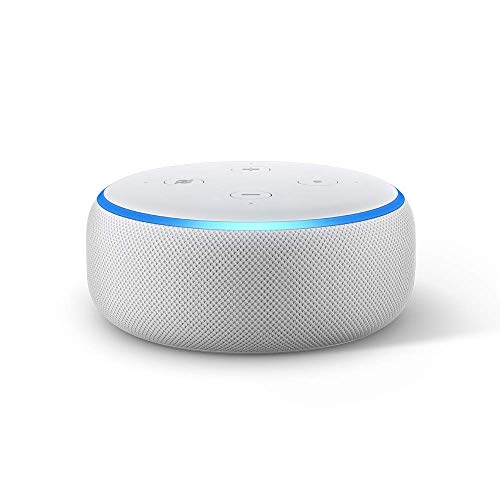 How Are the Echo Flex and Echo Dot Similar?

Since two products in the same family, there are a number of similarities between the Echo Flex and the Echo Dot. These similarities serve as strengths for both models and are well worth looking into when you’re wondering about how these models stand out in the market as a whole.

Both of these models allow you to take advantage of Alexa. This is the name of the virtual assistant that Amazon uses. You can call on her to respond to any queries you have or answer any commands you give her. This feature is the main function of the Amazon Echo products and are present in other models in the line as well.

When it comes to loading up information on your phone or a tablet, you have to be able to enter your password and sometimes even type the query in yourself. That’s why these Echo devices are so handy. You can lean on them to answer questions, look up information, play music, and more even if your hands are full.

As technology continues to push forward, concerns over privacy are growing at nearly the same rate. Amazon recognizes this concern and makes moves to protect your privacy with features on both of these models.

The biggest features are microphone on and off modes that these models feature. Many people worry when it comes to devices such as these since they “listen” to you. However, since you can control the functionality of the microphones, you don’t have to worry as much about security concerns.

What’s the Difference Between the Echo Flex Versus Echo Dot (Clock)? 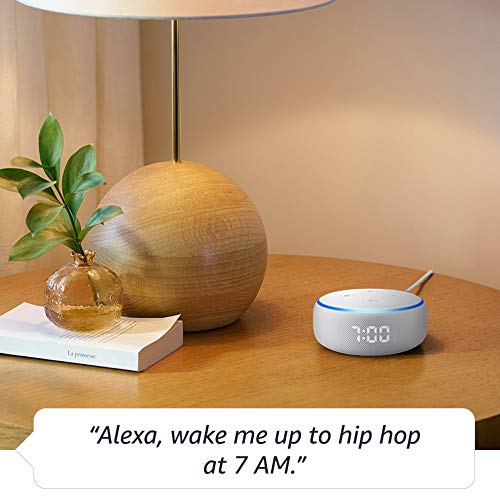 Knowing what’s similar about the Echo Flex and Echo Dot is good but your decision ultimately comes down to how the two models differ. While in the same family of products, these two models actually have quite a few differences to consider. These are some of the biggest ones to take into consideration! 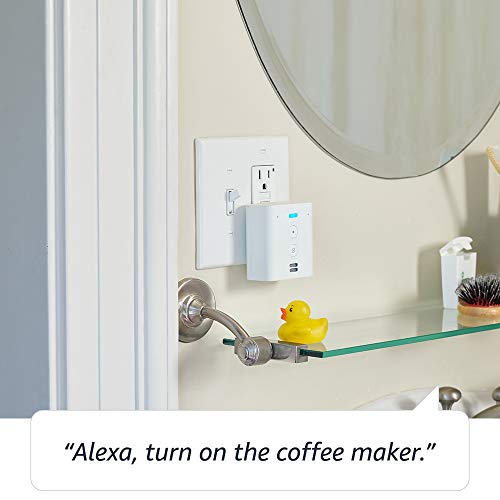 The first difference you’ll notice between these two is their aesthetic design. The Echo Dot has a rounded, flatter design that’s meant to be set on a flat surface like a side table or countertop. It even comes in four colors including sandstone, charcoal, plum, and heather gray to help you match your Dot to your decor.

The Echo Flex, on the other hand, plugs straight into an outlet. This means that it isn’t going to take up much space which is perfect for small homes and apartments. It’s made to be especially compact for this purpose and a sleek appearance.

We already discussed that the fundamental design of the two models is inherently different. However, there are other details to keep in mind such as color choices.

Now, when it comes to the Echo Flex, what you see is basically what you get. The simple, white design is the only option. You aren’t going to have the chance or need to worry about finding the right color. Since white is neutral, though, it won’t clash with whatever decor you already have in the room you’re keeping it in.

The Echo Dot, alternatively, comes in multiple colors to choose from. You can order it in sandstone, plum, heather gray, and charcoal. However, only the sandstone option features the visible clock on the side of the device.

When you’re talking about devices that have a focus on audio, the sound quality of the product is crucial. Between the Echo Flex and Echo Dot, the Echo Dot wins out on sound quality.

While the quality the Echo Flex offers isn’t poor, it is the lesser of the two. This is an especially important point if listening to music is one of your primary purposes for the Echo.

The Echo Flex simply doesn’t have a visual display. It’s an entirely audio device that relays information to you verbally. The Echo Dot does feature a digital display that adds to its appeal.

This display isn’t a full screen. It isn’t going to show you your favorite YouTube videos or allow you to make video calls through it. Instead, it has a simple digital display that will display basic information. For example, if you set a timer, need to know what time it is, or want to know about the weather, you’ll see this information illuminated on the side of the Echo Dot.

Another handy aspect about this is that the brightness of the digital display auto-adjusts. This way, you don’t have to worry about a blinding digital clock face at night or not being able to read the display in a bright room.

Common FAQs – What You Need to Know

Question: Will either of these devices “listen” when I’m not talking to them?

Answer: A big concern for many getting ready to buy a smart home device is if that device will “monitor” them consistently. Luckily, both of these devices have microphone shutoffs to ensure your privacy. In addition, all Amazon Alexa products are programmed to only “wake up” when you call out their keyword.

This is why, for example, you would start every query with “Hey Alexa” rather than diving right into your question. This helps to protect your privacy while still allowing both the Echo Flex and Echo Dot to serve you right when you need them. They aren’t going to listen in on or track your private conversations.

Question: Which is better for my small apartment?

Answer: The good news is that neither of these options is going to take up much space if you’re working in an area that doesn’t have a lot of room to spare.

That being said, the Echo Dot does need to be set on a flat surface while the Echo Flex only needs to be plugged into a spare outlet. This makes the Echo Flex the better choice if you’re particularly tight on space.

Question: Which device is better if I want to listen to music?

Answer: Both of these devices are great choices for listening to music as they will play what you want to hear on command. The Echo Dot has a leg up in this category, though, thanks to its ability to be connected with other Echo Dots you might own.

This allows you to build a surround sound system of sorts for audio. While the Echo Flex does connect with other Echo devices, this is often advertised as convenient to connect your whole home rather than to create a surround sound ambiance.

Verdict – Which One to Get Today?

When it comes down to the Echo Flex vs. the Echo Dot, neither product falls behind because it’s a “bad” product. Each of these models has its own strengths and weaknesses that make it a uniquely impressive choice.

See how Echo Studio 2019 and Echo Plus comparing to the latest Echo 3 here.

The Echo Flex is one of your most compact Alexa options. It stays in an outlet which means you aren’t going to have to worry about sacrificing any tabletop or countertop space. Even without this extra space taken up, though, you’ll still be able to call on Alexa for help with search queries or to command it to complete certain tasks.

The Amazon Echo Flex also has a slight leg up when it comes to pricing. While neither of these models has an insurmountable price wall to navigate, the Echo Flex comes at nearly half the price of the Echo Dot.

Even if it might push your budget slightly further, the Echo Dot isn’t anything to scoff at either. The biggest defining feature that sets it apart is the digital display. While it isn’t going to play you full length videos, it’s handy to be able to glance over at the time or temperature as you need to.

The Echo Dot also allows you to take advantage of Alexa Skills. This gives you the chance to step beyond what you might think of doing with your Echo device and learn something new throughout your day. Any device that adds to its own functionality beyond what you can think of comes with a distinct advantage.

At the end of the day, both of these products position themselves as great potential additions to your home or office. With the information we’ve given you, it’s your turn to decide whether the Echo Flex or Echo Dot is the ideal choice for your life.

Upgrade Your Echo Dot With the Hottest Cases, Stands, Mounts, and Smart Accessories