Dogfighting is a bloodsport where two or more dogs fight one another for the spectators’ entertainment. It has a long history that we can trace back to the Roman Empire. Nowadays, even though dogfighting is illegal in most countries, it is still practiced by many people all around the world. 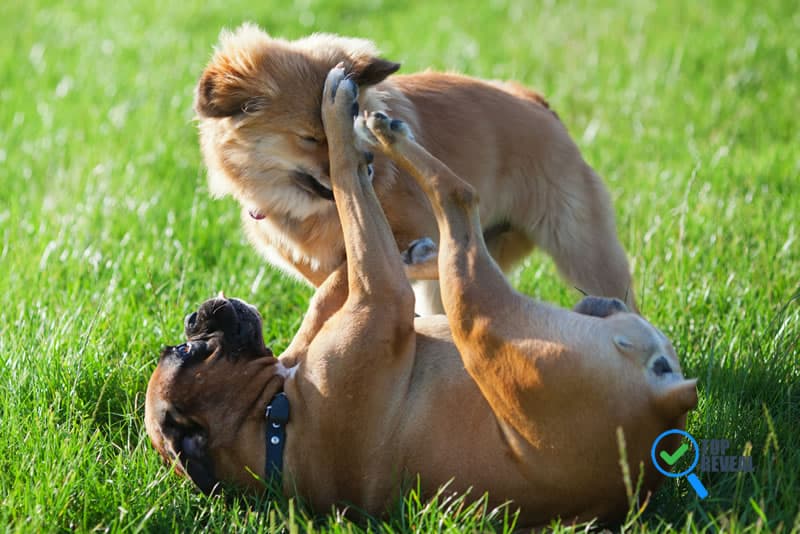 There are many breeds of fighting dogs, all trained to take part in this bloodsport. Most of them are large, low, and heavy, with a powerful build. They are also known for their unfriendly attitude towards other animals.

In this article, we take a closer look at fighting dogs and the practice of dogfighting. If you wish to learn more about these topics, feel free to read on.

What Makes a “Good” Fighting Dog?

To be considered a “good” fighting dog, it must be aggressive, have a massive build, and never back down from a fight. Only then can it be placed in the pit against an opponent. Many dogs are trained every year with this goal in mind. Nonetheless, before the training occurs, there are some predispositions all fighting dogs must meet.

Much like in the case of Doberman ear cropping, fighting dogs often undergo surgeries that aim to improve their physical appearance. For example, they have their ears cropped and tails docked close to their bodies. Thanks to these procedures, they are less vulnerable to being caught by other dogs fighting in the pit.

These surgeries are usually performed by the owners themselves using crude techniques and unprofessional equipment. They are painful for the animal and may even result in its death.

Those participating in dogfighting very carefully choose the breeds they use. The most popular ones are American Pit Bull Terrier, American Bulldog, Bull Terrier, and Cane Corso. They are very aggressive towards other animals and are well-known for their strength and endurance.

Throughout history, dogs have been developed explicitly for dogfighting. Regarding this fact, some dog breeds are considered illegal in a few countries. Unfortunately, people who take part in this illicit bloodsport take advantage of the violence that runs in these dogs’ blood.

However, it does not mean that some dog breed cannot become a family pet. With some dedication and a professional trainer’s help, everyone can eliminate its signs of aggression and raise a friendly animal.

Not every American Pit Bull Terrier is as aggressive as other dogs from its breed. The temperament differs from animal to animal, similar to humans.

To make sure that a dog is the best choice for dogfighting, owners tend to organize a practice fight or two to look for the signs of aggressiveness and hostility in the animal. If the dog suddenly stops fighting or starts looking for help, they decide to use it as a bait dog.

How Are Fighting Dogs Raised?

There is more than one way to raise a fighting dog. Nonetheless, all of them focus on enhancing the aggressive attitude of the animal.

Pet owners associated with dog fights often keep their animals away from other dogs. They do it by keeping them on short and heavy chains. It is used to increase a dog’s frustration. It also ensures that a dog will not begin socializing and maintains its mean demeanor instead. Additionally, the heavy chains work as a tool to improve its upper body strength.

Owners also closely watch over the dog’s food. For example, bulking diets, various supplements, and steroids are important in raising a dog of significant posture. Additionally, they use antibiotics to help dogs heal after they sustain an injury (e.g., break their leg).

An average training of a fighting dog involves exhausting exercise regimes. For example, dog trainers use canine treadmills to walk their dogs, building their stamina and cardiovascular health.

Sometimes animals like cats or rabbits serve as prey for a dog. Nevertheless, the training often includes bait dogs. This way, the dog can get familiar with fighting other dogs without suffering much harm itself.

Dogs that under-performed in their training fights end up as bait dogs. The life of such a dog is an unforgiving one. Its mouth is often taped shut, so it cannot defend itself and harm animals deemed more valuable than it. Sometimes, its teeth are broken to make sure it poses no threat to others.

Additionally, every bait dog experiences severe lacerations, broken bones, and other drastic injuries during its short lifetime. After a few training sessions, when its usefulness is over, it is killed.

Why Are Fighting Dogs Raised?

Dogfighting is a practice most people deem immoral and cruel. It is considered a felony in all 50 U.S. states. Yet, in 2007 CNN estimated that 40,000 people were involved in professional dogfighting in the United States alone.

The reason that usually stands behind dogfighting is greed. It is a profitable business where people can gain revenue from bets, stud fees, and admission fees. Even one dog fight can bring over a significant income for all those who are involved in it.

The monetary costs of training animals that may be successful in a dog fight are almost always lower than the potential gains. Additionally, many owners do not attend to their pets’ injuries, further lowering their operating costs.

Fighting dogs spend most of their life in constant danger. Eventually, after they serve their time, they are thrown away like everyday commodities. Most people believe that this needs to end. They argue that dogs are living beings and feel pain from the injuries they suffer.

Nevertheless, each year bulky and robust dogs are forced to fight for their lives in a pit. Owners carefully pick them over others, less resilient dogs. Next, they train them to transform them into the most effective killing machines.

Now you know more about this illegal activity which is dogfighting. Hopefully, with more attention given to this subject, we will stop the suffering of every animal involved in it.

Your Jaw Will Drop When You See What This Skateboarding Cat Does.. Amazing

Getting Your Fish Pond Ready for the Cold Months: A Step-by-Step Guide

How to Raise a Happy Cat - What Every Cat Owner Needs

17 Best Cat Prime Movies You and Your Cat Will Love