If you don’t speak Alexa it’s time you learn because Amazon’s stranglehold on the smart speaker market isn’t waning anytime soon. Despite a slew of devices designed to compete with the Echo line from other big name brands, in particular, Google, it is Amazon’s smart speakers that continue to dominate. Why? Quite simply, the Echo line is just too good, offering more features and apps that put it in a class by itself. That’s why when it comes to Echo Vs Google Home it’s really no contest. 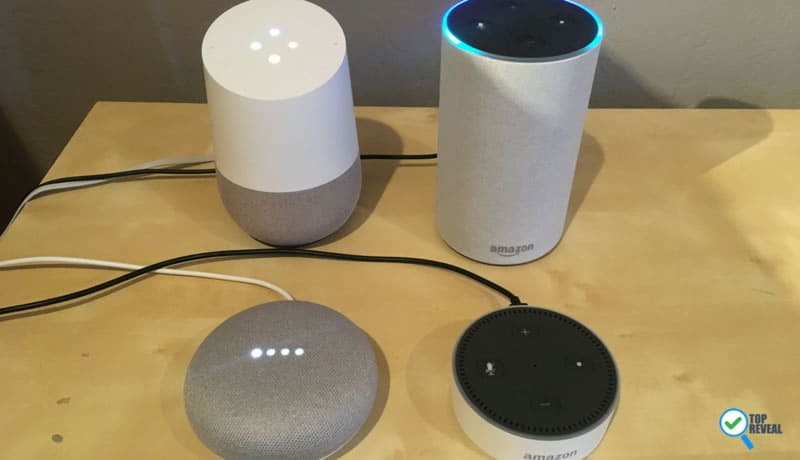 Amazon is the Apple of Smart Speakers

The numbers don’t lie; according to a recent report from Consumer Intelligence Research Partners (CIRP), the Echo products are the top choice in the U.S., holding a dominant 76% market share. In other words, 3 out of 4 Americans buy an Echo. Which translates into shipping roughly 20 million units and sales of around 15 million dollars, which is up by over 10 million since November.

And while sales are for all Echo products, it’s the Echo Dot, one of the smallest and most affordable devices in the bunch at $49.99 ($29 right now with the holiday special), that accounts for most of that revenue, as 50% of all sales are for that model.

In comparison, Google has shipped about 7 million of its Home products, the Google Home at $179 and the Home mini for $29 right now; Amazon’s Homepod is set to enter the field, but with it’s 300+ price tag it’s unlikely that it will dethrone Alexa.

Why Amazon is so dominant comes down to a few things, the 2 biggest being sound quality and smart home integration.  Yes, Amazon had a 2-year jump on Google, allowing them to fine-tune their line and add more features, but Google was expected to make a bigger dent in the field. It was a bit of a surprise to many in the industry that they haven’t done better, as many expected the Home’s ability to Google any question hands-free to be a big selling feature.

According to users of Google and Echo devices that were surveyed b CIRP, the main reasons they got their smart speaker were, in order of importance: streaming music, asking questions, setting timers and alarms, and to control other smart products in their home.

Which is why the Echo line, from the original Echo to the new Show, continue to leave the Google line in the dust. Amazon’s products, even the budget-friendly Dot, have a superior sound system. The new Echo 2nd Generation has Dolby-powered speakers for exceptional quality you can use while cleaning or for a party.

And the Dot, while not as strong or loud, is still crisp and far-reaching. You can’t use it by itself if you’re throwing a party, you’d need to connect it to a Bluetooth speaker, but for everyday use, it’s more than passable. When you do connect it with an outside speaker the sound is good enough for any get together you have.

Google’s products have built-in speakers as well, but they don’t come close to the audio quality. Music sounds a tinny and is nowhere near as clear. The beauty of these speakers is supposed to be that they can be used in place of a CD player, iPod or radio, but Google’s inferior output makes that almost impossible.

When it comes to home automation, Amazon once again has the upper hand, in part because it’s been on the market longer. The Echo line is compatible with more devices than the Home products, including the new Sol lamp from GE. The ability to control lights, TV’s, cameras and more without having to upgrade to a new system that is compatible with their speaker is an attractive feature.

Once again, this is a bit of a surprise. Amazon’s devices run on their Alexa platform while the Home devices run on Google’s search engine- which you would expect to be more recognized and compatible. Yet that is not the case, to Google’s chagrin.

In the end, the Amazon Echo line is just too strong for Google to take over. Their 2 year’s of experience in the smart speaker field has allowed them to perfect their products and make them more affordable to consumers, which is a 1-2 knockout Google can’t come close to.

7 Smart Home Devices that Can Save Money

Best Smart Locks for Alexa (2021) Comparison Reviews: Make the "Smart" Choice for You & Your Family